The Walt Disney Company announced in May that it was suspending its semiannual dividend, and said that it would revisit the issue in six months. Activist investor Dan Loeb wants that $3 billion dividend to end, and be reinvested in content for Disney+. 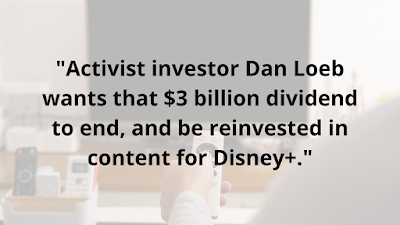 In a letter sent to Disney CEO Bob Chapek and the board today, Loeb argues that ending the dividend would allow Disney to double its budget for Disney+ original content, according to The Hollywood Reporter.

Loeb reportedly pointed out: “Beyond bringing additional subscribers onto the platform, increased velocity of dedicated content production will deliver several knock-on benefits spread across your existing base including elevated engagement, lower churn, and increased pricing power… [M]eaningfully accelerating DTC content spend will further broaden the divide between Disney and its traditional media peers — AT&T’s WarnerMedia, Discovery, ViacomCBS, Comcast’s NBCUniversal and Fox — none of which have the financial capabilities to execute such a bold plan… [W]ith Disney’s superior tentpole franchises and production capabilities, we believe that the company can exceed the subscriber base of the industry leader, Netflix, in just a few years.”

CNBC noted that Loeb also wrote: “The ability to drive subscriber growth, reduce churn, and increase pricing present the opportunity to create tens of billions of dollars in incremental value for Disney shareholders in short order, and hundreds of billions once the platform reaches larger scale.”

CNBC reported, “Shares [of Disney] have fallen about 6 percent in the past year as theme park and movie theater closures have hurt Disney’s operations. Netflix shares are up almost 95 percent over the same period.”

In terms of comparing dollars spent on content, CNBC also pointed out: “While Disney has been able to woo subscribers with its large catalog of movies, ‘Star Wars,’ and Marvel content, it hasn’t spent much on original programming. Netflix may spend more than $17 billion this year and more than $28 billion by 2028, according to BMO Capital Markets estimates.  Disney said last year it expected to spend about $1 billion on Disney+ original content in its fiscal year 2020 and just $2.5 billion by 2024. Some of that original content has further been delayed by pandemic quarantines, which have halted production.”

It will be interesting to see how Disney responds to Loeb given that Chapek was highly focused on Disney+ during the August earnings call.

Loeb’s Third Point Capital ranks as one of Disney’s largest shareholders. Disney’s full year and fourth quarter 2020 earnings call is set for November 12, which presumably will include a decision on the company dividend.