California matters. Whether people from other states like it or not, 12 percent of the U.S. population resides in the Golden State, and 15 percent of U.S. GDP comes from California. 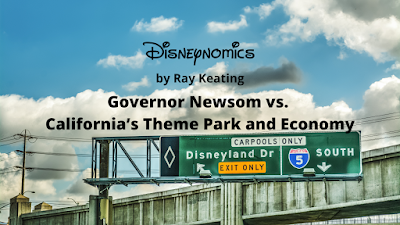 Therefore, when Californian politicians impose misguided and costly policies – such as higher taxes and increased regulations – on entrepreneurs, businesses and investors, it, of course, matters most to Californians, but it’s not like the rest of us can just shrug our shoulders and not care.

This economic reality is part of the backdrop to the latest head-scratching decision by California Governor Gavin Newsom and his Health and Human Services Secretary Mark Ghaly. At a news conference on Tuesday, October 21, the Newsom administration finally got around to providing guidelines for reopening theme parks in the state. But the guidelines were split between smaller and larger theme parks, and the news for the big boys, like Disneyland, was anything but good. That, in turn, is bad news for workers and small businesses as well.

As the Orange County Register reported:

The new guidelines mean Disneyland, Universal Studios Hollywood and other large theme parks won’t be able to reopen for months until their respective counties reach the least-restrictive “minimal” risk level…

The Orange County Health Care Agency Director Clayton Chau was quoted saying that it would be difficult for Orange County to reach the “minimal” tier until there was a vaccine, and he was looking for something like that coming next summer. That would put the reopening of Disneyland into the summer as well.

We have proven that we can responsibly reopen, with science-based health and safety protocols strictly enforced at our theme park properties around the world.

Nevertheless, the State of California continues to ignore this fact, instead of mandating arbitrary guidelines that it knows are unworkable and that hold us to a standard vastly different from other reopened businesses and state-operated facilities.

Together with our labor unions, we want to get people back to work, but these State guidelines will keep us shuttered for the foreseeable future, forcing thousands more people out of work, leading to the inevitable closure of small family-owned businesses, and irreparably devastating the Anaheim/Southern California community.

Theme parks have opened and operated safely around the world for months. Data and science prove that theme parks can operate responsibly anywhere – there’s no rational reason to believe they can’t do so in California. No one cares more about park employees and guest safety than the parks themselves.

This plan prolongs unemployment for tens of thousands of people, hastens bankruptcy for families and small business owners adjacent to parks, and contributes to insolvency for local governments whose budgets rely on parks as an anchor economic driver.

So, bewildering policymaking that undermines the California economy continues.

Some might ask: Why? At its core, it goes to a philosophical bias that places ultimate trust in government – i.e., in politicians and their appointees – to make broad decisions for society, while holding a deep distrust of private-sector entrepreneurs and businesses. But here we have another glaring example courtesy of Governor Newsom that politicians lack the knowledge and proper incentives to make intelligent decisions about most matters in life and the economy.

It’s true – politicians tend to be clueless. And Disneyland, other theme park operators, workers, small businesses that serve the parks and their workers, and the California economy suffer accordingly.