In the past few months, with the focus on so many things that have not reopened, or have been cancelled, such as “Mickey’s Not So Scary Halloween Party” at Disney World, the Candlelight Processional at Epcot, or Disneyland (California) itself, it is sometimes easy to overlook the strides that Disney is making in forging ahead in other areas. 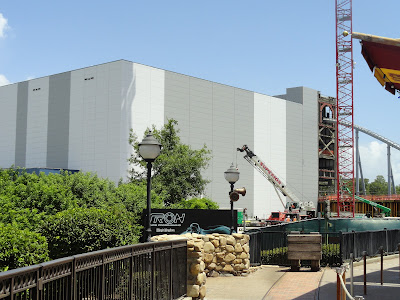 This week, we’ve not only seen video proof that Magic Kingdom’s “TRON Lightcycle Run” construction is rapidly advancing, as shown in Wednesday’s video posting  from Imagineer Zach Riddley on the installation of the first of 40 pieces for the curved wave canopy for the Upload Conduit portion of the ride, but Tokyo Disneyland (which brought back its “Light the Night” fireworks show and “Nightfall Glow” mini-parade on September 1) made a significant announcement about their park expansion. The France pavilion at Epcot is progressing nicely as well, and work continues on the Halcyon, the Star Wars: Galactic Starcruiser-themed hotel near Hollywood Studios.

This week’s Tokyo Disneyland announcement brought welcome news that on September 28, Tokyo Disneyland will be officially opening the largest expansion in the park’s history. This three-year-long undertaking stretches across three of the park’s lands - Fantasyland, Tomorrowland and Toontown - bringing with it new rides, restaurants, and shops. The opening had been expected in April, but was delayed due to COVID-19 shutdowns.

In Tomorrowland, The Happy Ride with Baymax (based on Big Hero 6) will welcome guests to a rotating ride similar to Alien Swirling Saucers, while in Toontown, Minnie’s Style Studio provides a new Disney Character greeting experience. Guests will meet Minnie in the studio where she designs, creates and photographs her original clothing designs. On their way to greeting the fashion icon in her studio, visitors will get to walk through Minnie’s office and workroom. Minnie will appear in an ever-changing array of seasonal costumes that she has designed herself.

There will be a number of new dining opportunities debuting as well, including The Big Pop in Tomorrowland, a specialty popcorn shop with its gigantic popcorn chandelier, and a 200-seat counter service location, La Teverne de Gaston, in Fantasyland. La Teverne de Gaston  proudly displays trophies from Gaston’s many escapades, near his fireplace, of course, and serves Gaston’s favorite brew and entrees such as sausage in a croissant. Next door, LeFou's will also offer snacks and goodies for park guests, including a new-to-Tokyo Disneyland apple-caramel churro.  But if shopping is more your thing, The Village Shoppes in Fantasyland, including La Belle Librairie, Little Town Traders and Bonjour Gifts will be opening their doors for your souvenirs and treasures.

A 1,500-seat theatre slated as part of the expansion is expected to open at a later date. The Fantasyland Forest Theatre is the first theatre in the park, and will be home to the “Mickey’s Magical Music World” show.