“Disney on Broadway” Stars Coming to the Dr. Phillips Center in Orlando

They may not have been able to be there for EPCOT’s annual Festival of the Arts, but some of your favorite Disney on Broadway performers will be coming to the Dr. Phillips Center for the Performing Arts in Orlando in March. 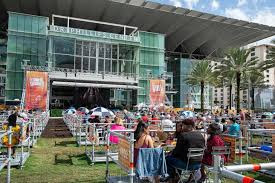 The concerts are part of the Dr. Phillips Center’s “Frontyard Festival,” and will take place March 20 (1:30 and 8:00 pm) and March 21 (8 pm). Ticket prices start at $25, and kids under 18 are free with each paid adult ticket during the Saturday Matinee performance (See the Dr. Phillips’ website for details). The six-month-long festival has provided a range of musical concerts, movie nights (including Disney movies), comedy acts, dance, fitness classes and brunches on the outdoor plaza at the Arts Center.

The Broadway artists have not only performed in Disney’s New York Broadway productions, but have previously sung at the America Gardens Theatre at Disney’s Festival of the Arts at EPCOT. They will be performing songs from a range of Disney productions, in addition to the ones they had starring roles in.

“The Music of Disney on Broadway” concert will feature Michael James Scott (Genie in Aladdin and in Tarzan), Ashley Brown (Mary Poppins in Mary Poppins, and Belle in Beauty and the Beast), Kissy Simmons (Nala in The Lion King), and Josh Strickland (Tarzan in Tarzan). They will be performing with a full band, and will not only offer up the hits they brought to life on the Broadway stage, but will also share music from The Lion King, Tarzan, Mary Poppins, Aladdin, Hercules, The Little Mermaid, Newsies, Beauty and the Beast, Aida, High School Musical, Freaky Friday and Frozen. If you’ve had a chance to see these performers at “Disney on Broadway” shows at EPCOT, you know that they are not only fabulous vocalists, but also entertaining personalities as well.

The shows are outdoors in front of the Dr. Phillips Center for the Performing Arts building, and guests will choose their own socially-distanced, private 5x7 platform for their group, one of nearly 400 elevated seating pods, or “boxes,” that are located six feet apart. According to the Dr. Phillips Center, “You’ll pick your own socially distant box for up to five people—where you can order food and drinks from some of your favorite local restaurants while you watch your show.”

Guests can purchase tickets and get more information at the Dr. Phillips Center for the Performing Arts website.