Will “Streaming vs. Theaters” Be Bigger Than “Godzilla vs. Kong”?

Yes, I’m excited to see Godzilla vs. Kong, which will be released tomorrow (March 31). Hey, when it comes to movie monsters, this is the heavyweight title fight. If I get a basic story that makes sense (Note to blockbuster creators: It’s not that hard for your story to make sense!) and great battles between legendary monsters, I’ll be satisfied. 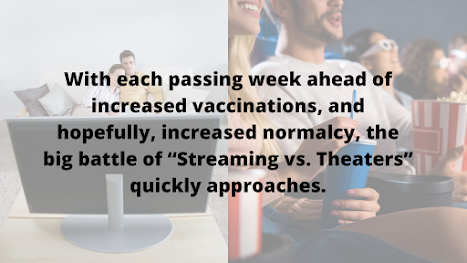 But a movie like Godzilla vs. Kong really is meant to be seen on the big screen, and while more and more people, thankfully, are being vaccinated, COVID-19 remains a thing. So, many of us will not be traveling to theaters to see this clash of titans, but instead will be watching on HBO Max.

While Godzilla vs. Kong is being released in theaters and on the HBO Max streaming service at the same time, it appears to be just a bit early for gaining true clarity in terms of evaluating the titanic struggle between streaming and theaters. At best, if more people than expected show up at the theater to see King Kong slug Godzilla, we at least might get a bit of much-needed optimism for movie theaters.

According to The Wall Street Journal, prior to the pandemic hitting, there were 5,502 theaters opened on a Friday night. That compared to only 2,558 on March 26, 2021. Yikes. But more theaters will be opening in coming weeks. Will we get back to 5,500? Hmmm.

With each passing week ahead of increased vaccinations, and hopefully, increased normalcy, the big battle of “Streaming vs. Theaters” quickly approaches.

Indeed, the first major engagement could be Disney’s Black Widow, which is scheduled for a July 9 release in theaters as well as via Disney+ with Premier Access (i.e., $29.99 in addition to the monthly Disney+ subscription fee).

Still, one analyst quoted by the Journal expected that theater capacity limitations are unlikely to be lifted before the fourth quarter of this year.

Major movie studios are not walking away from theaters. It was noted in the report that “Universal, Warner Bros. and Paramount all point to an exclusive U.S. theatrical window of 30-45 days for a post-Covid world,” which is “notably shorter than the 90-days the industry” used to operate under, but would still leave adequate time for the bulk of box-office receipts to accumulate – according to how the numbers traditionally break. But that’s assuming that consumer behavior will not change post-coronavirus.

Make no mistake, if moviegoers want to watch movies in theaters, the studios will be more than happy to oblige, while moving films to their streaming services quickly. But what if a significant chunk of moviegoers simply want to see movies on their own big screens in the comfort of their own homes?

I’m not sure how much would be lost, for example, if I choose to simply go with Black Widow via Disney+. And then there’s the additional question of being willing to wait for it on Disney+ without the additional charge. Will Disney+ continue with the Premier Access extra thirty bucks for big movie releases even as services like HBO Max serve up Godzilla vs. Kong at no extra cost?

All of the questions are being assessed by industry players, as they try to predict and read the consumer. In the end, the consumer will dictate some kind of mix between theaters and streaming. But discerning that balance at this point in time seems nearly impossible. Hence, we see why the CEOs of theater companies, studios and streaming services get paid the big bucks – and why, if they get it wrong, they’ll be tossed out of the C-suite.