“Zack Snyder’s Justice League,” “The Falcon and the Winter Soldier” and "Heroes and Villains"

With the arrival of Zack Snyder’s Justice League and The Falcon and the Winter Soldier on Disney+, what’s the ideal read to join these tales of superheroes? Consider Ray Keating’s Heroes and Villains: A Pastor Stephen Grant Short Story. 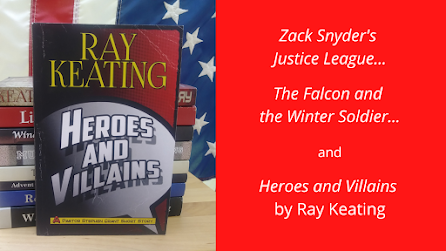 Stephen Grant, onetime Navy SEAL, former CIA operative and current Lutheran pastor, finds himself in an entirely unfamiliar setting – a comic book, science fiction and fantasy convention. But he still joins forces with a unique set of heroes in an attempt to foil a villainous plot against one of the all-time great comic book writers and artists. Reviewers love the adventure...

“An entertaining, immersive jaunt with a formidable protagonist.”  - Kirkus Reviews

“Keating's creativity and storytelling ability remain on point, for a fun and different take on Pastor Grant, and one that's just as satisfying as longer books in the series.”  - Self-Publishing Review

“Heroes and Villains … is an enjoyable romp complete with the gritty realism of the Burton Batman films, the camp of the Adam West adventures of the 60's, and the modern humor of LEGO Batman. If you know the adventures of the Avengers from the movies or the pages, dream of the day of decent DC films, or love the experience of Comic-Con, Heroes and Villains is the read for you! … How I'd love to see Pastor Grant on Netflix!”  - Lutheran Book Review

“This is a fantastic novel... If you are a comic book fan who is fed up with the political correctness that's going on, you have got to pick up Heroes and Villains... I highly recommend this book... I'm definitely going to be paying more attention to Ray Keating, and getting more of his novels.”  - Jacob Airey, host of StudioJake
Posted by Ray Keating at 9:25 AM