The traditional Irish Claddagh ring - a heart topped by a crown and held by two hands - symbolizes love, loyalty and friendship, three appealing qualities that make the world a wonderful place when they are practiced. 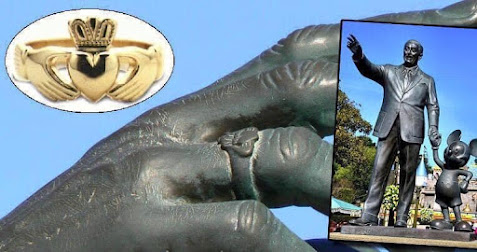 Walt Disney was a man who showed all three.

He was filled with love - for his family, his calling, and for life itself. He was also extremely loyal, and extended the hand of friendship to everyone in the world, through his works and his park(s).

Walt was proud of his family's Irish heritage and only wore two items of jewelry in public: his wedding ring and his Claddagh ring, bought for him by his wife, Lillian, at a shop in Connemara, Ireland in the 1940s.

Walt Disney’s family was from County Kilkenny, Ireland. His grandfather, Kepple Disney, one of 16 (!) children, immigrated to Canada in 1834. His son, Elias (Walt’s Dad), crossed the border to the U.S. in the late 1800s and moved to the Midwest. Walt was born in Chicago in 1901.

The famous "Partners" statue at the Disney parks, designed by Disney Legend Blaine Gibson, depicts the Irish Claddagh ring on Walt’s right hand (the one not holding Mickey, the one pointing to the future), but most people never notice it because it is above the sight line.

A happily married man, Walt wore his ring the “wrong” way - according to some Claddagh purists - with the heart pointing out, meaning that his heart was available. It amused Lillian, but she knew that he meant no slight to her. He just liked the way his Claddagh ring looked with the heart pointed out. The Partners statue reflects that, as does the wax figure of him at Madame Tussaud’s in Orlando.

Three qualities we often don’t pay heed to, but are deeply felt when we are the recipient of them. We should remember those moments and let them spur us into extending one or all of the three qualities to others, especially people who we might not know as well.

Like Walt, you’ll discover that showing even a little bit of love, loyalty, and friendship can open doors for you and propel you to great heights.

Have a great Saint Patrick’s Day!