DisneylandForward for the Entire Economy

(This piece originally was published at KeatingFiles.com)

Whenever a large company pitches government on a proposal that’s supposed to help that firm and the economy in general, this economist’s free-market radar goes up. After all, most of the time, such proposals involve a business looking for taxpayer handouts, but trying to dress up such welfare as being great for everybody, including the taxpayers footing the bill. 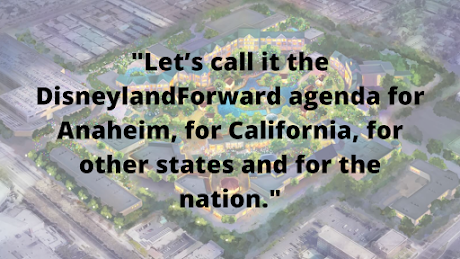 That’s why the Walt Disney Company’s new pitch to the City of Anaheim – called  DisneylandForward – to expand, well, Disneyland is so refreshing. It also should serve as a template for policymaking related to entrepreneurs, businesses, their employees, and investors, as we all work to climb out of this pandemic mess.

Disney is not looking for any kind of government aid, subsidies, or handouts in this proposal. In fact, in its various materials on the undertaking, the company explicitly declared: “To be clear, Disney is not seeking any public funding for DisneylandForward, nor are we seeking additional square footage or hotel rooms beyond what is currently approved and allowed.”

This is music to the ears of this economist. Please, tell me more!

Instead of seeking handouts, Disney is looking for Anaheim to be more flexible in terms of how it regulates the company. Specifically, Disney is looking for flexibility in terms of zoning regulations so that the company can move ahead and make investments in expansion that will serve new and current customers, boost the region’s economy, and create jobs. Disney is beginning a process of explaining and illustrating to Anaheim that a shift in its zoning from traditional, specific-use approval to zoning that allows for increased flexibility and integration in terms of uses – such as allowing a hotel, restaurants, attractions and entertainment in one area or facility, as opposed to just one of those options – not only makes sense for Disney and its business, but how the House of Mouse ties in with the rest of the regional economy and beyond.

Disney pointed out, “While Disney has the development rights and the desire to continue investing in Anaheim, the space to develop integrated offerings is severely limited. Without broadening the uses allowed within each district or demolishing and replacing many beloved theme park attractions, further integrated development and theme park investment are not possible.”

I’m always frustrated when government stakes out overtly hostile stances against entrepreneurs, businesses and investors. Such misguided actions spring from failures to grasp how the economy and business work; and how growth, wealth and jobs are created; as well as political philosophies rooted in fantasy, and/or politics built on cynicism and special-interest favors. And then there are businesses that seek government handouts, which only serves to gin up further hostility toward business. So, I wonder if the vast costs of the pandemic might change things, at least somewhat.

Disney put its DisneylandForward effort in the proper context of what we have been suffering through for the past year-plus:

“While no one could have predicted just how far-reaching the job loss and economic impacts would be as a result of the COVID-19 pandemic, we know this past year has been incredibly difficult. It has taken a major toll on our cast, The Anaheim Resort, Anaheim residents and families, Orange County, and California. But, with time, we will recover, and we’ll do it together. We believe in the future of this great city, and we are ready to join hands as even stronger partners. With continued investment, we can make an even larger impact on short-term recovery, enhance long-term growth, and help address some of Anaheim’s more difficult problems in the future.”

Again, how will we recover and grow? Not via government subsidies. Not by some big governmental undertakings with commensurate tax and regulatory costs. Not thanks to the us-vs.-them mentality that dominates too much of our public discourse and manifests itself in public policies. Instead, it will be accomplished by government thinking clearly and providing flexibility – dare I say: providing relief? – from burdens that make no sense, and only serve to raise the costs of or block productive, private-sector investment. In turn, entrepreneurs and businesses, including Disney, will be better able to make growth-generating investments.

Let’s call it the DisneylandForward agenda for Anaheim, for California, for other states and for the nation: No subsidies. Provide flexibility and relief from government regulations and other actions that make no sense. And thereby, free up the private sector to invest, innovate and drive economic, income and job growth.