When The Walt Disney Company signs on to the latest political cause favored by liberal activists, the company receives praise … or at least the company hopes to be praised … from those political corners. However, when Disney opposes an effort favored by the Left, the criticism, of course, comes swift and hard.

We’re seeing the criticism juicing up as Disney is part of a wide business coalition opposing the various tax increases proposed by President Joe Biden and Democrats in Congress, including increasing the corporate income tax rate by 40 percent, from 20 percent to 28 percent. 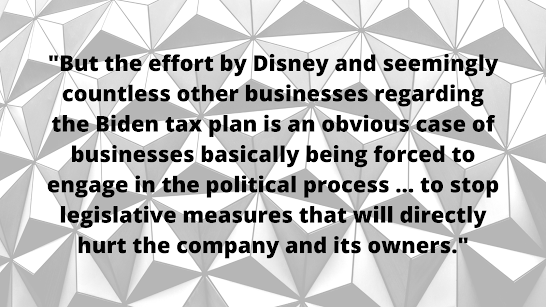 Getting involved in political issues always ranks as a dicey proposition for any business. And while lots of people talk about “corporate social responsibility,” there are assorted problems with such undertakings, from the risk of angering and chasing away part of your customer base to the ethical questions regarding corporate managers using shareholder dollars to fund their personal causes.

But the effort by Disney and seemingly countless other businesses regarding the Biden tax plan is an obvious case of businesses basically being forced to engage in the political process, such as via lobbying and advertising, to stop legislative measures that will directly hurt the company and its owners.

There is nothing nefarious about such undertakings by businesses, despite efforts by some to paint them that way, such as in a recent Washington Post story that verges on presenting rather standard responses by businesses to damaging legislation as a kind of conspiracy by business to hurt the little guy.

Of course, President Biden, whose administration has been unrelenting in hammering away at large businesses, is presenting his tax increases on business somehow as tax cuts for the little guy. Never mind that this makes no sense. Never mind that tax increases on business are never good news for individuals seeking jobs and increased earnings. After all, entrepreneurs, businesses and investors create jobs, and make investments that enhance worker productivity and therefore worker incomes.

So, with the Biden administration, Democrats in Congress, and their many political allies pushing for increased tax burdens on business, the business community must respond. It would be irresponsible not to do so. Indeed, it was the same case when the Republican Trump administration and its allies pushed protectionist measures that reduced opportunities in international markets and raised costs for business.

The decision of whether or not to engage on a political issue should be easy for companies like Disney. It shouldn’t be about the personal political preferences of company executives. Instead, it should simply be based on whether or not the issue or proposed legislation will impact the business. If so, then engage for or against as called for; and either way, get back to business, that is, innovating and serving your customers.

Please support the efforts of DisneyBizJournal.com to bring news, analysis and commentary on Disney to readers such as yourself. Make a contribution right here via PayPal. Thanks!
Posted by Ray Keating at 9:32 AM