Hailing for most of my life from New York, I’m guilty of assuming that, unless I’m in Italy, Italian food outside of the New York City metro area is not going to measure up. You’ve heard my ilk before, such as claiming “Pizza outside New York isn’t pizza.” And, well, it tends not to be. 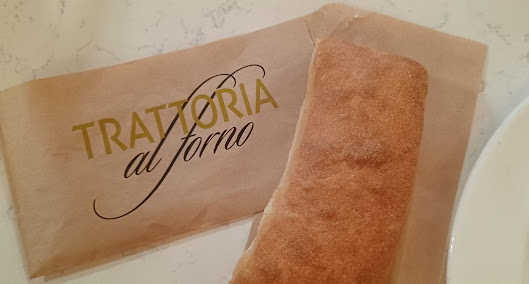 At the same time, I have long enjoyed Disney’s BoardWalk Inn Resort and entertainment area. That’s been the case since my wife and I rented a Surrey bike years ago, and put our young son in the front seat for little tikes. And I appreciate the turn-of-the-century, Atlantic City waterfront feel.

So, could I hit on a combo of place and food, specifically, the BoardWalk and good Italian cuisine? The answer with Trattoria al Forno is: Yes, absolutely!

Prior to our visit, there was some skepticism after hearing mixed reviews of the restaurant. But after experiencing Trattoria al Forno’s food and ambiance, I was left bewildered by such takes.

The Trattoria’s open kitchen concept is welcoming, and provided a lively backdrop to the room. The service was attentive and friendly. And yes, the food is excellent.

The meal started off with lovely small loaves of warm ciabatta with olive oil and a tasty tapenade. While the tapenade was a touch on the salty side, the bread was absolutely heavenly dipped in the olive oil, but was even better with what was to come.

We had ordered the Coastal Mussels appetizer ($18.00), which was quite good – with flavorful and tender mussels, and a nice small kick of red pepper. The pesto cream sauce worked magic on its own, and our waitress thoughtfully brought extra loaves of that wonderful bread for sopping up the sauce. We could have eaten a bowl of the pesto sauce all on its own!

Also, the Insalata Caprese ($13.00) ranked as a delightful appetizer. The house-made burrata was chilled and creamy, served on a bed of thick, ripe slices of tomato, with a sprinkling of heirloom tomatoes as well. The basil leaves were picture perfect, dark green and strongly flavored, with a light dressing of olive oil to pull it all together.

In terms of entrees, the big star with our group was the Veal Osso Buco ($34.00). It came on a bed of polenta, which worked well. The thick gravy nicely complemented the fall-off-the-bone veal. Delicious.

As for the Parmigiana di Pollo ($26.00), the chicken breast was thicker than typical for a chicken parmigiana dish, and was served over a bed of gnocchi. While a traditional pasta would have been preferable with the parm, the gnocchi base beneath the chicken was a bit of a culinary twist, and it still worked. 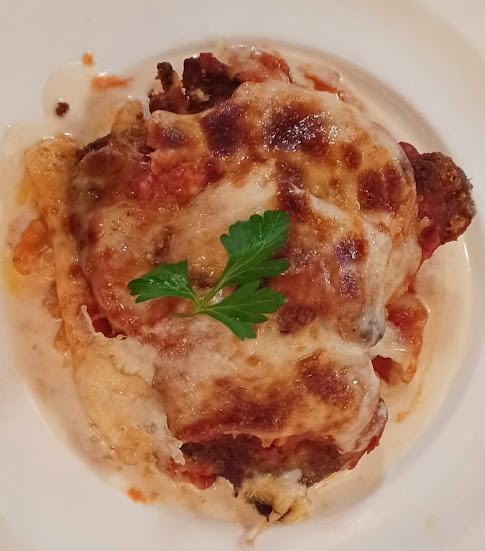 The only small disappointment during our meal was Grilled Swordfish Salmoriglio ($32.00), as the fish was slightly overdone and wasn’t as flavorful as expected.

But make no mistake, this was a superb dinner.

While too full for dessert, our party returned to strolling the Boardwalk, and catching the fireworks far off in the distance from the Magic Kingdom and from EPCOT, which were much closer. In fact, the view from the EPCOT bridge turned out to be ideal.