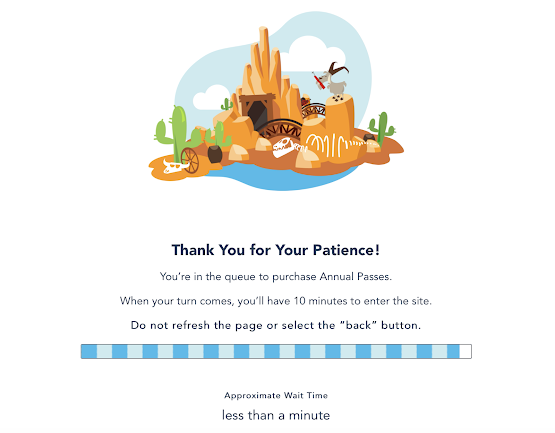 This was a big moment, given that Disney World was one of three reasons why we moved from New York to Florida this year. Three reasons? Yes. First, no more cold and snow. Shoveling stinks. Second, going from a high-tax, costly state to a state that is far more affordable, including no state personal income tax and cutting my property taxes by almost two-thirds. High taxes stink. Third, Walt Disney World. We love Walt Disney World ever since my wife and I spent our honeymoon there 34 years ago.

With the pandemic, however, new purchases of Annual Passes for Walt Disney World were put on hold last year. But then came the announcement at the end of last month that Annual Passes would be back – available for purchase on September 8, just in time for the celebration of Disney World’s 50th anniversary starting on October 1.

After checking a couple of times during the night/morning, things kicked in on the Disney site just after 6:00 AM for us. The message of an hourlong wait rather quickly dwindled to 15 minutes. And then the countdown proceeded according to the actual clock, and suddenly – Bam! – we were ready.

Filling out the information and … the page froze.

Filling out the information. Went further than the first time and … the page froze.

Filled out the information. Payment went through, and received our confirmation. The third time was the charm, and the third big reason for moving to Florida has been fulfilled. Yes, it was a rather magical start to the day!