For years, we came to Orlando for our Disney vacation in late August, and it always seemed that we missed Orlando’s “Magical Dining” event by just a few days. It was disappointing because it looked like such an interesting array of local restaurants that were participating in the annual restaurant fest, and at prices that would certainly encourage us to try new places.

Visit Orlando’s Magical Dining runs from August 27 through October 3 this year, its 16th year of serving up meals.  Each three-course, prix-fixe dinner is just $37 per person at many of Orlando’s most acclaimed restaurants. If that price isn’t enough to entice you, $1.00 from each meal served supports Pathlight HOME and IDignity, two local organizations helping to combat homelessness in Central Florida.

So, we’ve often wanted to branch out and try some of the local restaurants while we were in the area, and Magical Dining month seemed like a good excuse to do so.  But you know how it is when you are staying on property… the Parks beckon, making it hard to drag yourself off property to eat.  This year, though, we combined a Magical Dining experience with a Park-adjacent visit – we went to Il Mulino New York Trattoria at the Walt Disney World Swan Resort.  There are nearly a dozen “Disney” restaurants participating in the Magical Dining event, mostly at Disney Springs.

Il Mulino’s flagship New York location has been voted the #1 Italian restaurant in New York City for two decades by Zagat.  With that as its recommendation, we made reservations on a recent weekend night for a leisurely meal at the Florida site.  No one is rushing the experience at Il Mulino, and it isn’t because the wait staff is slow.  Rather, the restaurant was a hive of activity, but the meal itself was paced for the signature dining experience that it is.  (Be forewarned that there is a dress code.)

For those unfamiliar with the Magical Dining experience, you are given a special, trimmed down dining menu, showcasing some of the restaurant’s best dishes, in exchange for the special prix-fixe cost.  Our menu at Il Mulino included a choice from three selections in each of the appetizer, entrée and dessert categories. 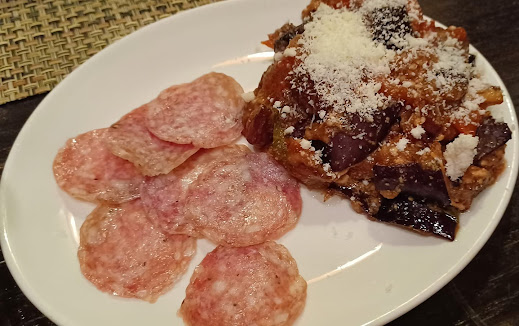 Our jovial waiter introduced himself with a bread basket containing rustic slices of bread, but more importantly, yummy focaccia-style squares with roasted tomatoes that everyone agreed was the better of the two breads, though you were welcome to slather your more rustic-style bread with the complimentary eggplant tapenade, top it with the accompanying salami slices, or dip it in a lovely olive oil. 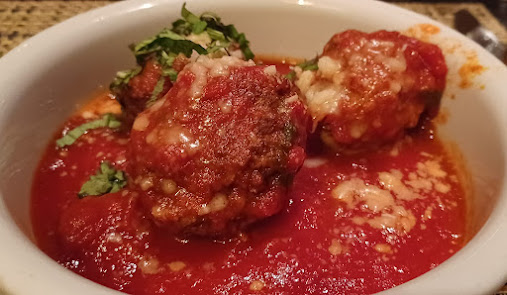 For our appetizers, our group chose two of the three selections (there was also a Caesar salad option that we did not try).  The Polpette al Forno, a set of three Italian meatballs in a tomato basil sauce with parmesan cheese, was delicious.  The red sauce was a traditional, yet light, Italian sauce with a hint of garlic that delighted both diners who tried it, despite the fact that one diner prefers a sweeter sauce, and one prefers a more traditional Italian-grandma sauce.  That’s pretty good if you can make both ends of the spectrum happy!  The other appetizer selected was the Calamari Fritti, lightly fried calamari in a spicy marinara sauce that brought just a touch of heat.  Both diners agreed that this was perfectly done calamari, tender with a light batter, and not at all chewy, which calamari all too often tends to be. 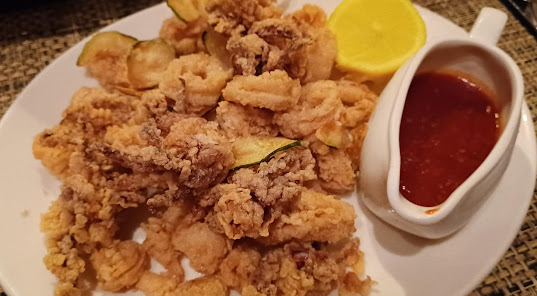 The three main course options included a mushroom rigatoni, a salmon, and a chicken fra Diavolo.  Our table opted for the sautéed salmon in garlic and olive oil with a spicy wild mushroom vegetable top dressing, and the Pollo fra Diavolo, a boneless chicken with Italian sausage, zucchini and onion in a spicy red sauce.  Both dishes had quite the kick to them, a welcome addition to the chicken fra Diavolo, but completely unexpected in the salmon dish.  The salmon itself was perfectly done, a lightly crispy outer layer over a moist and flaky interior.  Would that all restaurants perfected their salmon this way!  The salmon perched on a lightly sautéed bed of broccoli rabe, and was dressed with a top garnish of spicy mushroom and peppers. While it was a nice offset to the salmon, which had a more subtle flavor, the heat to the vegetable topping was unexpected, so consider yourself warned! 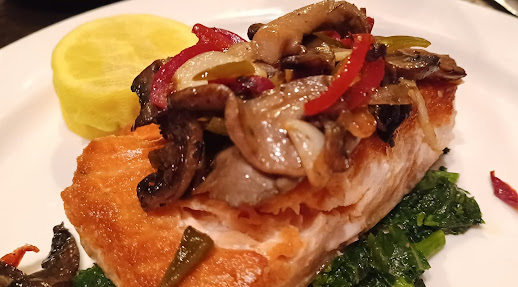 On the flip side, the heat was totally welcome in the Pollo fra Diavolo, which was served with chunks of sweet sausage, broccoli and onions, mingling in a red sauce.  While Disney often labels things “spicy,” that is a relative term by Disney’s often-toned down standards that need to make a dish more palatable to a wider range of audiences.  It’s a bit of culinary false advertising on Disney’s part, if you will. This dish, however, was a gift in that it didn’t hold back.  It said spicy, and spicy it was.  One of our diners said they wished “spicy” always came with this level of heat at Disney, and they thoroughly enjoyed their entrée.

The Torta al Cioccolati, the flourless chocolate cake served with a whipped cream zabaglione, was a dense, dark chocolate cake that was rich without being overly sweet. The Tiramisu, espresso soaked lady fingers with mascarpone cheese mousse and cocoa that gave the overall dish a more chocolate appearance than traditional tiramisu, was the lightest tiramisu we’d ever eaten.  Topped with mounds of chocolate curls, it was impossible to finish this enormous portion of chocolate soaked goodness. As if we hadn’t already indulged enough, our waiter came to the table at the end of our meal to present us with a small glass of complimentary limoncello, warning ahead of time that it was “sweet and strong,” but would be a tasty digestive aide at the end of a very filling meal.

Orlando’s Magical Dining event runs until October 3.  (Head to Visit Orlando for the complete list of more than 90 participating restaurants.). If the other restaurants joining in this year are as fantastic as Il Mulino, we will certainly be heading out to explore another new venue.  And for sure, Il Mulino has made it onto the list of restaurants we will be revisiting in the future at Disney as well. Our thanks to our waiter and the Il Mulino chefs for a “magical” evening.