Disney to Live Stream New Fireworks Shows Ahead of Debuts

Without a doubt, every Disney fan would like to be in the audience on Disney World’s 50th Anniversary on October 1, 2021, to witness the kick-off of the spectacular new fireworks extravaganzas.  But since park reservations at the Magic Kingdom are already at capacity, and the park only holds so many people anyway, Disney has come up with a solution. They will be offering one-night live streams of the two new shows for guests’ enjoyment. 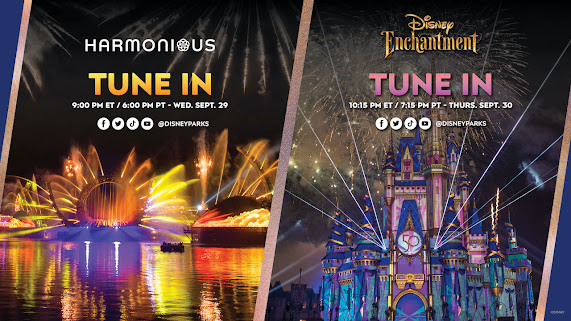 Disney Parks Blog reports that Harmonious “pays tribute to the stories and songs that unite us all featuring new technical magic that includes special pyrotechnics, moving fountains, special lighting and media.”  More than 240 artists in a dozen different languages have come together to create the arrangements for the show’s music.

Disney Enchantment will also be bringing some new tech to the table, as the Castle projections that fans have come to love take over the rest of Main Street as well, with immersive projection effects that extend all the way down Main Street during the fireworks. The original song that accompanies the festivities, “You Are the Magic,” is brought to you by a former Walt Disney World cast member, Philip Lawrence, who is an eight-time GRAMMY winner.

The fireworks shows will be part of the 18 month long “World’s Most Magical Celebration” honoring 50 years of Disney Magic in Florida.