“Castle of Magical Dreams” To Debut in Hong Kong November 21 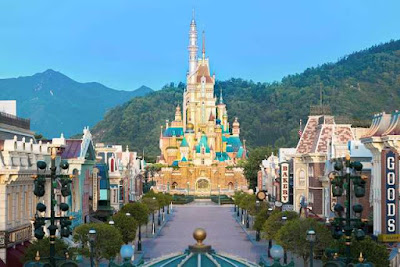 While most of Disney’s castles are the residences of a particular princess -  such as Cinderella in Disney World and Sleeping Beauty in Disneyland California – Hong Kong Disneyland’s new “Castle of Magical Dreams” will reflect the personalities and stories of 13 Disney Princesses.   (It formerly was the overseas home to Sleeping Beauty.) The newly redesigned, now larger castle’s “architectural elements embrace the characteristics of each heroine through the interpretation of colors, icons, patterns, and cultural features, with uniquely designed towers, turrets, and spires dedicated to their respective stories,” according to Hong Kong Disneyland. It is the first time that Disney has undertaken such a complete overhaul on one of its iconic castles.

The castle redesign is part of the multi-year expansion currently underway at the park, including a first of its kind Frozen-themed land scheduled to open in 2021. The redesign has become even more significant now that the government of Hong Kong - the majority owner of the property at 53% to Disney’s 47% - has turned down Disney’s request to develop an additional adjacent parcel in order to expand Hong Kong Disneyland.

Among the special events helping to kick-off the anniversary celebration on November 21 is  “Building a Dream: The Magic Behind a Disney Castle,” an exhibit where guests can see for themselves how Walt Disney Imagineering embarked on the process of transforming the castle for its debut, or the “Glimpse into the Magic” tour of the Castle of Magical Dreams. The immersive, audio-narration tour gives guests an up-close look at the architectural designs and cultural features of the new castle. “A Disney Christmas” also premieres on November 21.