Despite COVID Bumps, Disney Moves Ahead on New Attractions

The fallout from COVID may have caused no end of turmoil in 2020, but Disney still has its eyes on the future as they move toward the new year.

Yesterday, Josh D’Amaro, Chairman of Disney Parks, Experiences and Products, was one of the speakers at the annual IAAPA Expo, which this year was held virtually, and he shared a look at some of the Disney projects that are moving forward. IAAPA is the International Association of Amusement Parks and Attractions,  the attractions industry’s trade association with more than 6,000 member companies.

During his address, D’Amaro reflected on Disney’s journey over the past several months, as well as the path forward. He also shared a variety of construction photos, videos, and artist renderings to show off the progress of various attractions. Among the highlights of D’Amaro’s keynote remarks at IAAPA were:

• Updates on the progress of the Avengers Campuses at Disney California Adventure and Disneyland Paris. D’Amaro’s presentation included a peek at the ride vehicles for Web Slingers: A Spiderman Adventure. 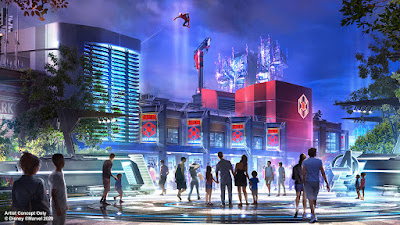 • News of the ongoing transformation of EPCOT, including the construction progress of the soon-to-debut nighttime spectacular “Harmonious”; videos of the ride path and track for the Guardians of the Galaxy: Cosmic Rewind omnicoaster with its 360 degree rotating vehicles and reverse launches; and Remy’s Ratatouille Adventure, slated to open in 2021 in the France pavilion, with its trackless ride vehicles that allow you to shrink down to the size of a rat as you make your way through Gusteau’s in a family-friendly 3D chase with adorable Chef Remy.

• Star Wars fans will probably lose their minds over the renderings of the new Star Wars: Galactic Starcruiser staterooms that D’Amaro shared.  It might be a “hotel,” but the Halcyon will function more like a cruise ship, where guests will board the starship for a 2-day, 2-night immersive experience and “become the heroes of their own Star Wars story.”  The drawings shared by D’Amaro give prospective Jedi a better look at their “home away from home.” 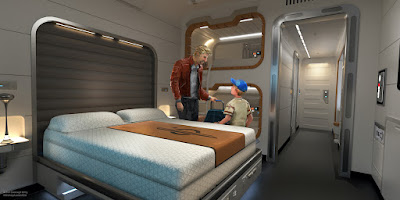 • Disney’s Hotel New York – The Art of Marvel – at Disneyland Paris, “celebrating 80 years of Marvel storytelling in a typical New York setting.” The hotel’s contemporary Art Deco style will be only one interesting feature of the new resort. Marvel fans will discover the largest publicly viewable collection of Marvel artwork in the world.

• Shanghai Disney Resort, where the park’s eighth themed land and the first-ever Zootopia-themed land at any Disney park is also progressing.  Aerial photos of the land shown at IAAPA showed off the construction of the giant show building that will use state-of-the-art technology to bring the metropolis and animal characters of Zootopia to life.

Additional photos and details from the IAAPA address are available on the Disney Parks Blog.