It’s no secret that Central Florida is one of the world’s top tourist destinations. Soon, all those visitors may have another way to get from the airport to the House of Mouse. 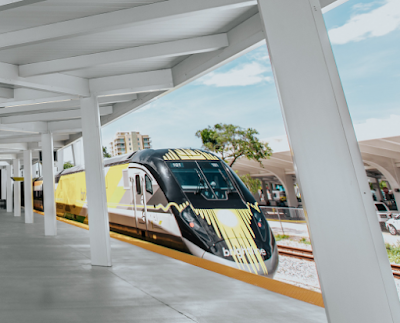 Brightline, a private passenger rail company, will need final local government approvals for the project, but together with Disney, it announced this week their agreement to build a new station at Disney Springs. The route will be part of a planned extension of the high-speed railway’s offerings to the airport. The railway can reach speeds up to 125 miles per hour.

According to Patrick Goddard, president of Brightline, “Brightline will offer a car-free connection to the millions of visitors from around the state and the world who plan to make Walt Disney World Resort part of their vacation plans. Our mission has always been to connect our guests to the people and places that matter, and Walt Disney World Resort is a tremendous example of this.”

The exact location and a potential start date for construction of the station have not been announced by either Disney or Brightline. But according to a release from Brightline, “The Brightline station is intended to provide a convenient travel option between Walt Disney World Resort and Brightline stations at Orlando International Airport (OIA), Miami, Fort Lauderdale and West Palm Beach and planned stations in Aventura, Boca Raton and Port Miami. Brightline’s expansion from West Palm Beach to OIA is on track to be completed in 2022.” More than 170 miles of new track will be laid as part of the expansion.

The proposed station at Disney Springs includes a ground floor lobby, passenger facilities, and an upper level train platform. According to WESH, “They are currently in the design phase of the station to create the appearance and find out when the build will start.”

There are still hurdles to work out in the construction process, COVID notwithstanding. Brightline faces approvals processes with the Florida Department of Transportation, the Central Florida Expressway Authority and Orlando Utilities Commission. The construction of the new station at Disney Springs is contingent on those approvals.