IAAPA, the International Association of Amusement Parks and Attractions, met virtually at their Expo 2020 and education conference this week, and inducted three new members into the IAAPA Hall of Fame.  Two of those inductees were Disney trailblazers. This year’s inductees are Tony Baxter, Greg Hale and Mats Wedin.

The IAAPA Hall of Fame award “recognizes individuals who have made a lasting impact on the global attractions industry.” This year’s inductees join the ranks of such illustrious Hall of Fame members as Milton Hershey (the chocolate king responsible for Hersheypark); P.T. Barnum of the Barnum and Bailey Circus;  Alberto Zamperla of Zamperla  (ride manufacturer); and Walt Disney himself.

According to Michael Collins, 2020 chairman of the IAAPA Hall of Fame and Archives Committee, “The IAAPA Hall of Fame celebrates industry-changing leaders and we are proud to induct these leading-edge innovators into the Hall. Tony Baxter, Greg Hale and Mats Wedin are inspiring examples to everyone in the industry. They embody the ingenuity, creativity, passion, and leadership the attractions industry is known for and their contributions leave a lasting legacy.” 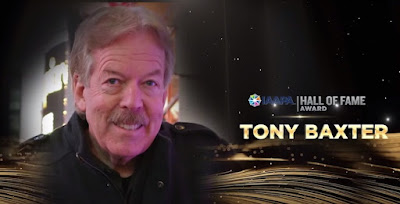 Disney Legend and Imagineer Tony Baxter is a well-known name in Disney fan-circles. He’s also rumored to be the inspiration for the character of Barnabas T. Bullion, the founder and president of the Big Thunder Mining Company at Big Thunder Mountain Railroad at the Magic Kingdom. Bullion is also a noted member of the Society of Explorers and Adventurers (S.E.A). His portrait hangs in the queue at Big Thunder.  Barnabas’ likeness to Tony Baxter is striking, but you can be the judge the next time you ride Big Thunder.

Like many Disney creatives before him, Baxter started out among the front line cast members. In 1965, he was just 17 years old when he began serving up ice cream at Carnation Plaza Gardens on Main Street in Disneyland. He made his way to WED Enterprises, where his vision landed him a spot as executive vice president in charge of design for Disney Parks.  He and his creative team brought guests such iconic rides as 20,000 Leagues Under the Sea, Snow White’s Adventure, Big Thunder Mountain Railroad, Splash Mountain, Indiana Jones Adventure, Star Tours, and Journey Into Imagination. He was also part of the master plan development for Disneyland Paris. He is currently returning from his sort-of retirement to Walt Disney Imagineering to work on the reimagination of Splash Mountain. Tony Baxter was named a “Disney Legend” in 2013.

Greg Hale may not be as instantly recognizable a name to Disney fans, but he certainly is just as responsible for creating the magic in the parks.  Hale began his career at Disney in 1988 as a manager of electrical and electronics engineering at Walt Disney World, moving up to become the first vice president and chief safety officer for Walt Disney Parks and Resorts in 2002. His niche is in ride design and operations, and he holds more than 80 patents worldwide, including for the Disney FASTPASS service. IAAPA also cites Hale’s efforts to “develop designs to improve attraction accessibility, including assistive captioning technology seen today in Disney parks across the world, as well as at the World of Coca-Cola Museum, The Hall at Patriot Place in Massachusetts, the Dallas Cowboys Stadium in Texas and several U.S. National Parks.”

A leader in the efforts to improve amusement ride safety standards, Hale has also led IAAPA’s global safety standards harmonization initiatives, and has previously served as IAAPA’s chairman of the board.

Mats Wedin served as Volvo’s director of marketing before arriving at Liseberg Amusement Park in Gothenburg, Sweden, where he was influential in expanding the park, as well as developing Liseberg’s first Christmas event. The new Christmas programming extended the park’s operating season and attracted thousands of additional guests to the park each winter. As a result, many other European parks were inspired to add similar events to their calendars. Mats has served not only as a global ambassador for IAAPA, but as IAAPA’s 2007 chairman of the board.

If you would like to see the awards presentation in its entirety, as well as the honorees’ thoughtful responses, head over to IAAPA’s Vimeo stream here.