Facing Threats and Murder, a Pope Calls on a Lutheran Pastor and Former CIA Operative for Help 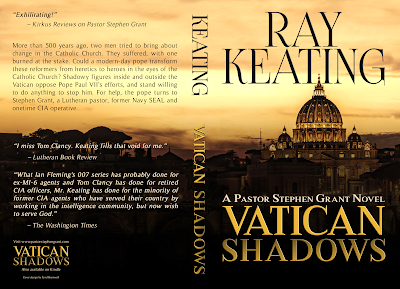 More than 500 years ago, two men – Jan Hus and Martin Luther – tried to bring about change in the Catholic Church. They suffered, with one burned at the stake. Could a modern-day pope transform these reformers from heretics to heroes in the eyes of the Catholic Church? Shadowy figures inside and outside the Vatican oppose Pope Paul VII’s efforts, and stand willing to do anything to stop him. For help, the pope turns to Stephen Grant, a Lutheran pastor, former Navy SEAL and onetime CIA operative.

The action is intense and unrelenting. The characters and relationships are captivating and filled with complexity, commitment and betrayal. The twists and turns are fun. The dialogue is lively. And the story serves up reflections about faith, love, conflict, history, and friendship that are thought-provoking.

Ray Keating said, “First and foremost, I hope readers – whether they be longtime or new Pastor Grant readers – enjoy Vatican Shadows as a page-turning thriller. In addition, I think Vatican Shadows could serve as an ideal book for all kinds of book clubs and discussion groups.”

Paperbacks and the Kindle edition of Vatican Shadows: A Pastor Stephen Grant Novel are at Amazon via https://www.amazon.com/dp/B08P1S5R26 and signed books are at https://raykeatingonline.com/products/vaticanshadows.

About Keating and his Pastor Stephen Grant thrillers and mysteries, Kirkus Reviews simply says “exhilarating.” Lutheran Book Review says, “I miss Tom Clancy. Keating fills that void for me.” The retired host of KFUO radio’s BookTalk declares, “Ray Keating is a great novelist.” David Keene of The Washington Times calls these novels “great reads.”  And another reviewer observes, “How I'd love to see Pastor Grant on Netflix!”

Review copies, and author interviews and appearances are available upon request.