COVID-19 has brought the fun at another Disney Park to a grinding halt.  For the third time, Disney’s Hong Kong park will close due to rising COVID numbers, beginning tomorrow (December 2, 2020). 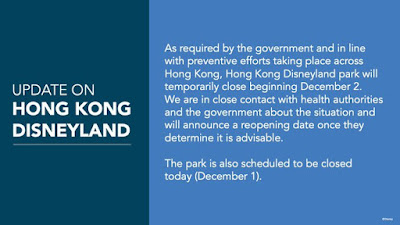 According to Disney, “As required by the government and in line with preventative efforts taking place across Hong Kong, Hong Kong Disneyland park will temporarily close beginning December 2. We are in close contact with health authorities and the government about the situation, and will announce a reopening date once they determine it is advisable.”

Following their initial closure in January 2020, Hong Kong Disneyland reopened in June, but then closed again in July, reopening yet again in September. Hong Kong was one of the Disney parks cited at the Q4 earnings call in early November as being a net positive for Disney’s bottom line. Christine McCarthy, Senior Executive Vice President and Chief Financial Officer of The Walt Disney Company, reported at the earnings call, “Walt Disney World, Shanghai Disney Resort and Hong Kong Disneyland all achieved a net positive contribution in the quarter, which means we generated revenue that exceeded the variable costs associated with re-opening.”

This is the second Disney Park to re-close because of COVID-19. Disneyland Paris, after re-opening in mid-July, closed for a second time in late October, with a hopeful re-launch date of Feb. 12, 2021. Disneyland California remains closed for the foreseeable future, and Disney Cruise Lines are sitting at the docks awaiting future sailing dates, having extended suspension of all departures through at least January 31, 2021.  Sailings are cancelled on board the Disney Magic, Disney Wonder and Disney Dream through February 1 and the Disney Fantasy through February 6.