An Oswald the Lucky Rabbit Christmas

In this film, written and directed by Walt Disney himself and animated by Ub Iwerks and two others, Oswald and his pals volunteer to bring holiday gifts to kids at an orphanage. The children then cause all sorts of havoc with their new toys and Oswald has to rein them in. 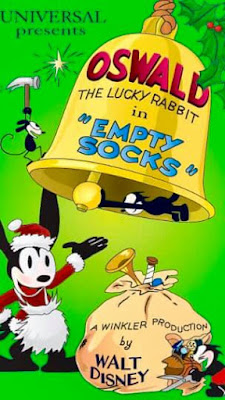 Two months after this movie debuted in New York City, Walt had a meeting there with his business partner - Charles Mintz - who informed Walt that Universal was claiming full rights to Oswald and taking most of Walt’s animation staff from him. This betrayal led directly to the creation of Mickey Mouse by Walt and Ub Iwerks, who remained at Disney.

In 2006, Universal traded the rights to Oswald back to Disney in exchange for the contract rights to broadcaster Al Michaels (true story!)

“Empty Socks” was one of many early Disney cartoons thought lost forever, but a partial copy (about four of six minutes) was found in Norway in 2014 and given to the Disney Archives.