The Quintessential Book on Walt Disney and Christmas

If you’re looking for an entertaining and informative book to read about Disney and the Christmas season, then there’s only one answer: ﻿The Vault of Walt Volume 7: Christmas Edition Yuletide Tales of Walt Disney, Disney Theme Parks, Cartoons & More by Jim Korkis. 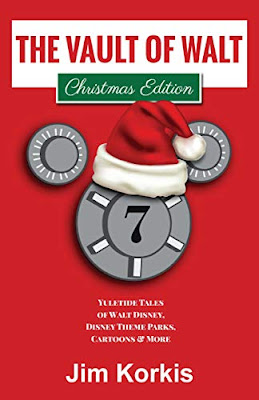 For the past four decades, Korkis has been a Disney historian who has penned hundreds of articles and over twenty books about all things Disney. He excels in this book that covers Christmas with Walt Disney, Christmas and Disney on television, Christmas at the Disney parks, Disney and the Thanksgiving Day Parade, and much more. Each page offers facts and information to please an audience from the most casual Disney fans to the most avid Disney aficionados.

Here are a few short quotes that I enjoyed…

• “Disney and Christmas is an opportunity for people to reconnect with the wonders of childhood. Christmas might seem incomplete without some element of Disney whether it is a cartoon, a toy, a book, or a visit to a theme park.”

• “It was Walt Disney himself who insisted that even though the Candlelight Processional was to celebrate Christmas that there would be no Santa Claus and no Disney characters so that the focus could be on the real reason for the season.”

• “So, in December 1958, the first evening Candlelight Processional was held with singers from sixteen choirs moving down Main Street to the plaza where they performed a full concert with the Dickens carolers singing from the Sleeping Beauty Castle balcony. It was later shifted to the train station.”

Ray Keating is the editor, publisher and economist for DisneyBizJournal.com, and author of the Pastor Stephen Grant novels and assorted nonfiction books. He can be contacted at raykeating@keatingreports.com.