The Magazine Cover That Never Happened

On the morning of Sunday, December 7, 1941, staffers at TIME Magazine, one of the most influential weekly news publications in history, were mostly at home after spending the week putting the finishing touches on a special year-end issue that would feature the popular Disney character Dumbo - whose movie had premiered a few months before - as “Mammal of The Year,” in a whimsical departure from their usual “Man of the Year” covers. 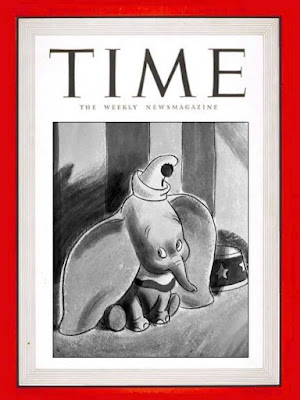 This was intended to help ease tensions during a time when the world was still feeling the effects of the Great Depression and was already at war in Europe, Asia, and other parts of the globe.

It was also meant to show how Walt Disney’s influence on American culture was widening since his 1937 massive hit with Snow White.

Disney artists were commissioned to provide a black and white sketch of Dumbo, to match the usual style of portraits seen on TIME’s covers.

When the U.S. Navy’s fleet at Pearl Harbor, Hawaii, was unexpectedly attacked and destroyed by the Japanese that day, taking over 2,400 lives, the U.S. was instantly thrust into the war, and the focus of TIME (and every other publication) changed.

Dumbo was immediately bumped from the cover in favor of U.S. military leaders. President Franklin Delano Roosevelt, one of the runners up to Dumbo, was named TIME’s Man of the Year for the third successive year.

The story about Dumbo did run, but it was buried inside the magazine after dozens of pages about the war. The Disney Studio property in Burbank, California, was commandeered by the U.S. Army (due to its proximity to a Lockheed production facility) and Walt lost much of his staff to the service.

Disney spent most of World War II producing films at cost for the military, as well as designing insignia and logos for them. The studio didn’t begin to turn a profit again until 1950.