The November 12 earnings call by the Walt Disney Company didn’t serve up any earth-shattering information. But it did reinforce the company’s laser-like emphasis on direct-to-consumer (DTC) services (i.e., streaming).

It was noted that paid subscribers at the end of the fourth quarter (which closed on October 3, 2020) registered 73.7 million for Disney+. And Disney CEO Bob Chapek noted that Disney+ was launched exactly one year ago, and subscriber levels have far exceeded expectations. 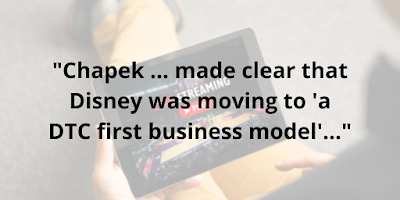 For good measure, ESPN+ subscribers hit 10.3 million, which was up versus 3.5 million a year earlier.

And as for Hulu, total subscribers have hit 36.6 million, which was up from 28.5 million last year.

By the way, that tallies up to 120.6 million paid subscriptions for Disney streaming services.

Chapek, as he did in the previous earnings call, made clear that Disney was moving to “a DTC first business model” and that DTC stands as the “key driver of long-term value” and the “key to the future of our company.” He, therefore, noted the “continued increase in our investment in DTC content.”

As for the theme parks, Chapek served up a negative take on the state of California standing against the re-opening of Disneyland, saying he was “extremely disappointed” and pointing to California using “arbitrary standards” as opposed to actual science and evidence. As a result, Chapek noted that the state was hurting local communities and “decimating small businesses.”

And regarding the Disney Cruise Line, Chapek noted that the CDC’s new requirements to get back to sea represented “high hurdles,” indicating that they might push back the cruise line’s reopening. Chapek did highlight, however, high demand for cruises for the back-half of 2021 and for 2022.

Finally, while Chapek avoided talking about actual results of the Mulan premiere access release, he was positive on the strategy, which, no doubt, will annoy many Disney+ subscribers.