One of the Most Important Dates in Florida History

Walt Disney and his older brother/business partner Roy appeared 55 years ago at a November 15, 1965, press conference at the Cherry Tree Plaza Hotel in Orlando, Florida, near Lake Eola, with Governor Haydon Burns. 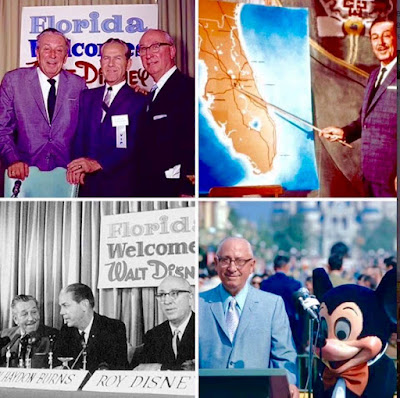 There, they officially announced to the world what a few had already suspected, that they were the mystery buyers of almost 30,000 acres of bog and swamp land in Central Florida.

To say that this was one of the most important dates in Florida’s history is no understatement. It ranks right up there with Ponce DeLeon’s arrival in 1513, and the opening, four centuries later, of the highways and rail systems connecting the Northeast and Midwest to the Sunshine State.

To put it in perspective: Before Disney set up shop, most visitors to Florida headed to the beaches or the coasts. The swampy, marshy, lake filled interior of the state was desolate land used largely for agricultural purposes.

Now, over 75 percent of the 120 million people who visit Florida in an average year spend their time in the greater Orlando area, never venturing anywhere else in the state.

In 1965, there were less than 400,000 people living in central Florida, and it accounted for just 10 percent of tax revenue to the state.

Today, it's one of the biggest metropolitan areas in the country, with close to three million residents, and provides well over 50 percent of Florida’s tax revenue. Walt Disney World alone has generated more than five billion dollars.

Walt passed away just about a year after this press conference, so he never actually got to see the finished version of Walt Disney World.

His brother Roy made sure that the dream didn't die. He postponed his retirement and stayed on with the company until the resort opened in October, 1971.

On Oct. 1, 1982, a modified version of Walt's E.P.C.O.T. debuted, not as the city of the future as Walt had envisioned, but as a theme park/permanent world's fair.

It's amazing to think that all of these things came from the fertile imagination of one man, one of the greatest dreamers who ever lived, and through the continued efforts of his brother, the financial genius of the company.