The Walt Disney Company’s earnings announcement today included a big gain in Disney+ subscriptions during the first quarter 2021, which ended on January 2, 2021. 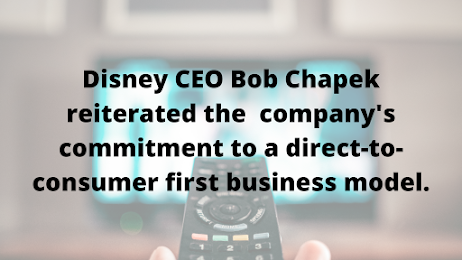 So, tallying up these three streaming services, subscriptions came in at 146.4 million at the close of the first quarter, versus 120.6 million in the previous quarter and 63.5 million last year.

Disney CEO Bob Chapek reiterated the commitment to its direct-to-consumer business, declaring that Disney was operating a “DTC first business model.” Given that reality, the earnings statement offered the following on DTC:

Direct-to-Consumer revenues for the quarter increased 73% to $3.5 billion and operating loss decreased from $1.1 billion to $466 million. The decrease in operating loss was due to improved results at Hulu, and to a lesser extent, at Disney+ and ESPN+.

The increase at Hulu was due to subscriber growth and increased advertising revenues driven by higher impressions, partially offset by an increase in programming and production costs due to higher subscriber-based fees for programming the live television service.

The improvement at Disney+ was driven by an increase in subscribers, partially offset by higher programming and production cost amortization and increased marketing and technology costs. The increases in subscribers and costs reflected the ongoing expansion of Disney+ including launching in additional markets. The current quarter included three months of Disney+ operations whereas the prior- year quarter included two months.

On the parks front, it was noted during the call that the open Disney theme parks are operating at 35 percent capacity.

As for overall earnings, Disney beat expectations for the first quarter. While analysts largely expected an earnings-per-share (EPS) loss for a third quarter in a row, Disney actually managed a positive EPS of $0.32. Again, while that was down markedly from the same time last year, which was pre-pandemic, it was an unexpected profit.