Disney Parks Blog has popped the air out of NFL fans’ footballs – there will not be a Super Bowl LV parade at Disney this year. It’s a pity, too, because the Chiefs and Buccaneers would be just a short car ride away in Tampa, Florida, for this year’s gridiron contest. 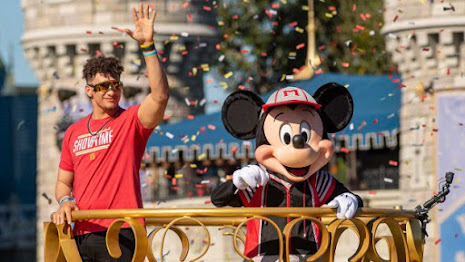 In previous years, the MVP and his victorious teammates were invited to Disney’s Parks to be celebrated with a parade down Main Street U.S.A.  This year, though, COVID has put a damper on the festivities, as “parades” aren’t happening in Disney right now as a way to keep people socially distant.

The idea for the commercial originated with Disney CEO Michael Eisner’s wife, Jane, and you can see the whole story, “The Super Bowl, Michael Eisner’s Wife, and the Winner’s Parade at Disney World,” in last year’s DisneyBizJournal’s Super Bowl news.

Expect to see the “I’m Going to Disney World!” commercial right after the game. (You can also “catch” it on Disney’s social media sites.)