Ideas for Romance at Disney World from … Whom?!

But given that Valentine’s Day is upon us, what about some ideas for romantic spots and things to do at Disney World? After all, many of us guys need all the help we can get. 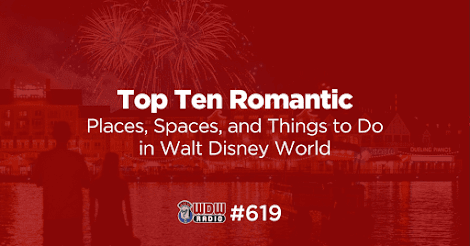 Well, obviously, the two people to turn to for such insights would be WDW Radio podcast host Lou Mongello and his guest, Tim “Bananas” Foster from Celebrations Magazine.

No offense to Lou and Tim, but among the many talents of these two Disney experts, being aficionados of all things romantic might seem like a bit of a stretch, to be generous. At least that’s what I thought. But tuning in to Episode #619 of the WDW Radio podcast titled “Top Ten Romantic Places, Spaces, and Things to Do in Walt Disney World,” I was pleasantly surprised.

If you’re unaware, these two guys have rocked some great “Top Ten” Disney episodes of this podcast over the years, and they actually ace this one. So, if you’re looking for some good ideas for romantic spots and things to do at Walt Disney World, listen to Lou and Tim.

Who would have thought it? Yep, life is full of surprises.