There’s an old saying that calories inside the Walt Disney gates magically don’t count… And besides, you’re on vacation, so you aren’t eating as rigidly as you would at home anyway. That being said, among my guilty indulgences at Disney are Mickey Bars, and just about anything at Amorette’s Patisserie in Disney Springs.

The glass bakery cases at Amorette’s are filled with in-house created deliciousness, from Crème Brûlée to petit cakes, to Éclairs and Crêpes. You can even watch the pastry artists at work, which is always interesting. But among the most fun creations are their themed desserts. Over the course of several days, we tried two of the specially designed, limited time confections. 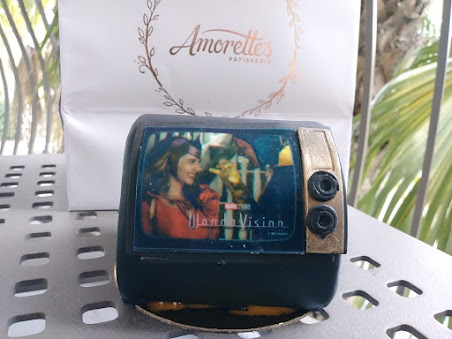 Right now, Disney is basking in the sweet success of its WandaVision Disney+ series, and Amorette’s has picked up the challenge. And it was quite the challenge for us to get our hands on one of the little nuggets. Amorette’s has invented a miniature television cake, complete with an edible scene from the past week’s WandaVision show.  It took three trips to Amorette’s to finally be able to tune-in to the goody – they were sold out each time we went.  Even at 2:00 in the afternoon, they were down to just two TV sets left for the day when we finally captured our prize!

The television is just over four inches long, coated in chocolate ganache, with an edible paper scene on the front. There have been different scenes from each of the WandaVision decades released each week as the new episode airs on Disney+, and ours was from the ‘90s “Halloween” episode. Each cake lasts only one week before the next episode, and hence the next week’s TV, is released with the new Friday WandaVision episode. Early versions of the TVs were in black and white reflecting the 50s era, while more modern eras have been “colorized.”

Inside, the petit cake is a combination of light and dark cakes, and white and dark chocolate mousse.  The cakes were light and airy, and the rest of the TV was super sweet. We couldn’t agree on the flavor of the darker cake, however. It was reddish in tint, but didn’t taste like the typical red velvet cake. It didn’t quite come off as chocolate, either. Maybe because the chocolate ganache was so sweet, the cake came across more delicately.  $20.00 is a bit steep for a dessert, but the cake was large enough that we split it three ways, so it seemed a much more reasonable indulgence for a late afternoon pick-me-up, and was so sweet you probably couldn’t have eaten it by yourself anyway. 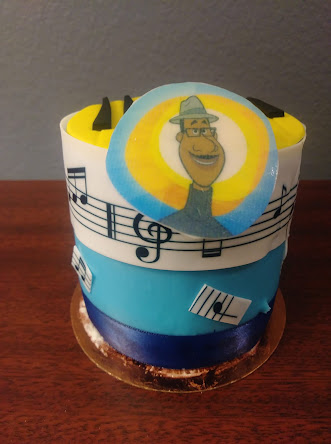 Next on the dessert menu was the Soul petit cake, themed to the recent Disney/Pixar movie and coinciding with the Celebrate Soulfully events currently going on in Disney Springs, including some top-notch live music at night. The Soul cake was beautifully decorated with music notes and the face of jazz musician Joe Gardner, the protagonist at the center of the animated film.  The chocolate chiffon cake was filled with chocolate and raspberry mousse, with a bold layer of raspberry fruit, and little white chocolate crispy pearls. It was coated in a sweet blue ganache with white trim.  The cake again was $20.00, and was more than adequate to split three ways.

We didn’t try it, but there was also a limited time Princess Tiana petit cake with a similar flavor make-up as the Soul cake.

Amorette’s is always coming up with new holiday and themed creations. If you are interested in the Soul cake or the WandaVision TV, you’d better hurry, because their days are limited.