Already this morning, two reporters have contacted me for a comment on this non-story about Disney and The Muppets (a franchise they’ve owned since 2004.)

Despite the click bait headlines you’re seeing reposted by people who fail to find the actual details of the story - and the comments of overheated TV and radio pundits - Disney has NOT declared The Muppets or The Muppet Show (1976-1981) racist or offensive as a whole. 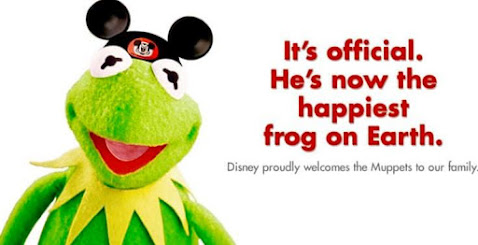 Disney has simply put a twelve second disclaimer in front of 18 out of the 115 or so episodes now available for everyone to watch on their Disney+ streaming service, due to short segments on those shows that contain outdated cultural depictions.

Rather than cutting/censoring those segments, or just burying those 18 episodes forever, Disney has allowed any viewers to watch them, but they also put the short disclaimer in front of them to let folks know up front that there might be some things that shock viewers in 2021.

Yellow Muppets with buck teeth and slanted eyes in a chorus singing “Ring Ting, Ching Chong,” red skinned Muppets in war paint speaking in “ugga wugga, how!” broken English, and bearded Muppets with turbans blowing things up might not offend you, and that’s fine, but for those sensitive to depictions like that, the disclaimer gives them the opportunity to avoid it, at no loss to you.

It’s the same as going to the movies or flipping channels and seeing an R rating for sexual situations and saying, “Yeah, my family’s going to skip this one.”

That’s your prerogative, but that R rating still allows the movie to be shown for others who choose to see that film, even with younger family members in tow.

It’s also similar to peanut allergy warnings on products. If you’re not sensitive, you can ignore the warning and enjoy the product, but for those who are, the “made with peanuts” disclaimer gives them a welcome chance to pass the product by without taking it away from you. They are not “soft” or “weak” because something affects them and not you.

Disney and other companies have been adding disclaimers as a sensible alternative to banning or removing films/shows entirely.

It’s the mature way to handle it.

Nothing has been “canceled.”

It’s the exact opposite of that. Over 50 hours of shows that haven’t been seen in years by most of the general public are there to delight in, which is in no way close to cancellation.

Disney is actually trying to make The Muppets culturally relevant again, and this is a step in the right direction.

Kermit and Mickey are just fine with each other in this particular instance. They’re both part of one big happy corporate family.