After a busy day of meetings and work, the day had gotten away from us and we suddenly discovered it was nearly 8:00 pm and everyone was starving. Dining in the age of COVID can be a daunting task, however, so after scouring the Disney website for a suitable choice, we landed at Three Bridges Bar and Grill at Disney’s Coronado Springs. Since it was a location we’d been wanting to try since it opened in 2019, our family was looking forward to the meal. 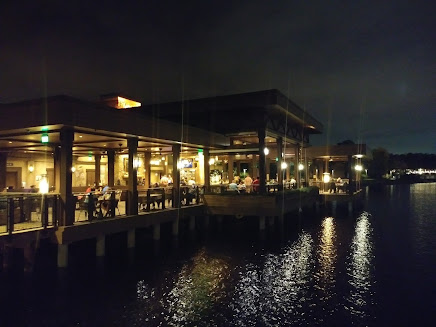 Three Bridges is a southwestern-style casual dining spot on the “Villa del Lago” island in the center of Lago Dorado, accessed by – you guessed it – three wooden bridges. Its middle-of-the-lake location is especially delightful in the evening, with a breeze blowing through the open air eatery. The lights from the nearby Gran Destino Tower reflect on the water, making for a romantic dining spot that is equally welcoming to families with children in tow due to its laid back vibe. (There is a kid’s menu.) Though we were there in the late evening, it would be a perfect location to relax with a drink and watch the sun set as well. On cooler nights, the firepit and torches give a warmer ambiance to the setting.

In this era of COVID, we were especially impressed by how extra-cautious Three Bridges was compared to other restaurants. Temperature checks were made on the way in, hand sanitizer  stations were available at the entrance, and our server offered up small plates for our masks so that we didn’t put them directly on the table surface or in our pockets. It was the first time we’d seen a restaurant offer this small, and appreciated, touch. QR codes at the table also allowed diners to pull up menus on their phones, rather than touching shared plastic or even paper menus. 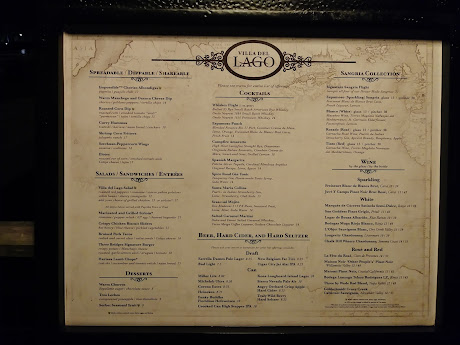 The menu consists of an interesting selection of “shareables” and our group ordered two of the most popular ones, the Szechuan peppercorn wings ($14.00) and the shrimp-corn fritters ($17.00).

The wings were brushed with a soy-ginger glaze that had just enough of a kick from its spices, and leaned toward the “sweeter side” of spiciness as opposed to a “burn your lips” kind of spicy. A garnish of pickled vegetables was a surprisingly yummy addition to the plate. 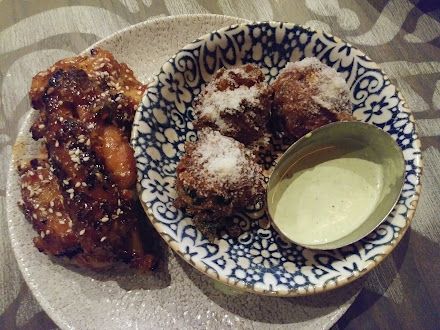 The real stand out of the night, however, was the shrimp-corn fritters. There were four to the order, with a delightful dipping crema. There was a hint of sweetness to each bite as well, offset by the diced red pepper in the fritter. Perhaps the sweet taste was due to what we thought might be a tiny dusting of sugar over the top of the shrimp ball?  Or maybe the corn in the fritters was just that sweet. In any case, a uniquely made jalapeno-ranch dipping sauce was served with the fritters, and one of our diners thought they could eat a whole bowl of the dipping sauce on its own!

For our entrees, we chose three separate selections. The Braised Pork Tacos ($14.00) came as a set of three filled soft blue corn tortillas. A crunchy marinated carrots and radish slaw topped each of the tacos, with a dollop of salsa verde and Cotija cheese sprinkled liberally on top. The braised pork was very tender, and as a plus, the pork wasn’t one of those pulled pork versions  smothered in so much sauce you couldn’t taste the pork. Rather, Three Bridges lets the pork shine on its own, and it was delicious! 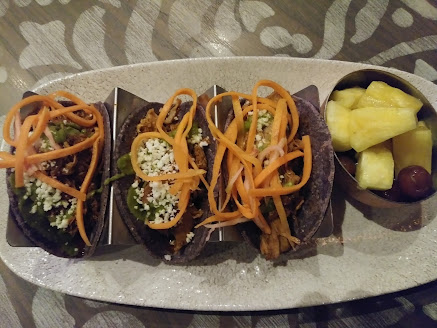 Our group also ordered the Harissa Lamb Chops ($25.00), which were ultra-tender and juicy. Three chops came nestled on a Naan flatbread, and were perfect for eating right off the bone. Topped with a tzatziki, cucumber and tomato relish, the lamb chops were a big hit. 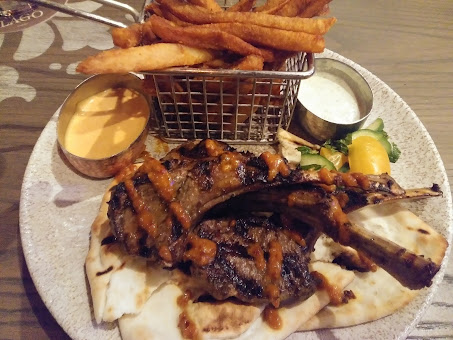 The Crispy Chicken Biscuit Sliders ($15.00), the final selection, came served two to a plate, and had a bit of an unexpected consistency. They offered a very “homemade” rather than processed feel to the chicken, and the hot honey and blue cheese topping gave the sandwich an extra boost of flavor.

Many of the dishes at Three Bridges come with a choice of smoked paprika fries or fruit, and in our case, two of our diners chose the fries, and found that they were accompanied by a nice dipping sauce that had just a hint of a smoky flavor. The fruit was a combination of chilled grapes and fresh cuts of pineapple.

In addition to their shareables, entrees and salads, Three Bridges offers a full selection of cocktails and their signature sangria pitchers.

Sadly, we didn’t make it to dessert… we were just too stuffed. Next time, though, we have our eyes on the warm churros.  We might just go back one of these days for a late afternoon respite, and order the churros and an ice cold drink. And maybe watch the sun set over the water.